what a busy but productive two weeks!

This has been such a busy couple of weeks but I have been on such a high as all three glazes yielded some great pieces - of course it means I cant part with some of them - typical me. Sit and look at things too long and they become permanent fixtures in my already overflowing pottery house! - more complaints from the man of the house about pottery no matter where his eyes wander..... But it was also the great jewellery workshop with Maurie Maunsell which really spiced things up. Now I want to make silver jewellery as well as still sit and play with the clay non-stop - oh where are the estra hands for all this creative activity? Managed to make three rings and even added some of our hard-won Palmer gold from the weekend working jaunts we had in the 80's - think Christopher still has vivid memories of that shovelling behind the dredge along my side. As for Jeffery and Aleta they were too young so spent hours enjoying the surroundings and playing in the sand - we just shovelled and of course Bruce and I had gold fever so we would spot those glinting pieces on the mat and just want to put through more sand - poor Christopher. Well I ended up melting some of that beautiful rich gold specks and they sit atop two rings which I made from scratch. 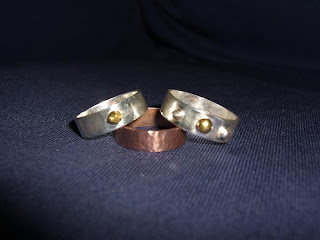 Coming home from the end of the workshop I then had to madly finish glazing my big pot - well that was a task - didnt like the first design so I had scraped it off then sponged and reglazed again with the base glaze. I then sat and decorated until after midnight - had to get it done as I like to get up and start my firing at 6/6.30 at the latest as it always seems to take 12 hours. I have accepted that and am happy with my results so why change. I always love getting the first glimpse of the pots and will the kiln to cool quickly but patience is always the potter's life and I have to wait out a full day and night until I can peek. Don't know how those potters stand the days they have to wait for some of the climbing kilns to cool. 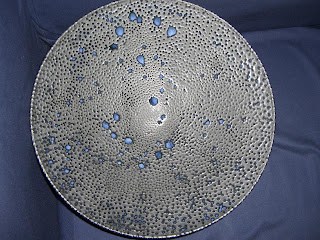 Here is the finished pot - the photo really doesnt do it justice as the blue glaze seems to pop out with little volcanic rims - really unusual and probably the result of the messing around with the base glaze - I am really happy with it but as usual cant sell it!!!
I then had my big pots to finish glazing and that was the final fire - they were stunning and are the best pieces so now I am so keen to make more and experiment. Have to get something done for the Sydney Teapot Show as weel so after the weekend exhibition I have to get back into it. I have ideas running around with the boy's offering some great ideas so I think I will have 3 teapots to send.
Well off to bed - photos of my big pots will be on here in a couple of days.
Posted by mudheartpottery at 4:09 AM No comments: