I hate cleaning burners......and I have two to pull apart and clean before I can get my glaze firing done. Was hoping the pressure would blow the rubbish out but it didn't happen so the bisque firing took longer then normal. Haven't fired since November so no wonder the rust etc has caused problems. At least its not all four I have to tackle so I shouldn't complain. I did complain though about the gas going up in price - so expensive up here - bought my last bottle in November and there was a price rise then and now its gone up again.

Have been sieving kaolin for my porcelain and putting the little bits of coloured kaolin and rock aside. I should have been cleaning but out came the mortar and pestle to grind it to fines so I can hopefully get a glaze. Kept some of the sand and ground it as well so perhaps I can have a play with it all and get some surprises - or disappointments. 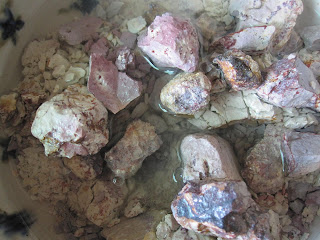 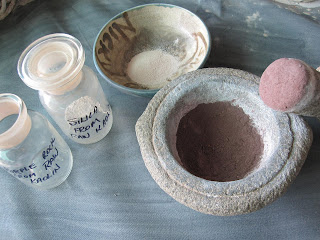 I wonder will he sleep through tonight!!!
Posted by mudheartpottery at 4:22 AM 2 comments: 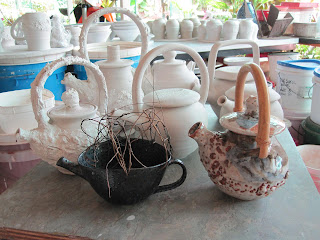 There are teething problems with the little person in our house - 4 hours lack of sleep will play havoc on the pottery front today, but I can't blame that on these two finished teapots! I still can't quite believe I actually fired the teapot on the right and put a handle on the thing without the glaringly obvious fault. This was an end of year effort so it speaks volumes about 2009! And that other strange unfinished attempt for the 2009 Sydney Teapot Show - ah well I did have one that actually made it down there - sometimes you have to wonder at the creative ideas that emerge from addled brainspace!

The temperature and humidity is soaring up here and the rain is dropping in short bursts giving minimal relief so potting outside under the awning is quite something - they call this crazy condition associated with prolonged summer heat 'mango madness' Still I have some teapots ready for the bisque - lots of bauxite will be splashed about so the kaolin will work its magic on the shino and glazes and handles are in the right place this time.
Posted by mudheartpottery at 1:42 PM 1 comment:

He was an incredible artist and will be missed on the runways
Posted by mudheartpottery at 3:21 PM No comments:

Michael Kline's 12 to 12 plus walking here 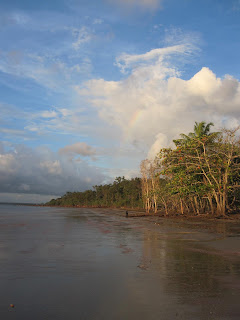 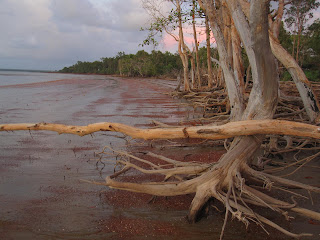 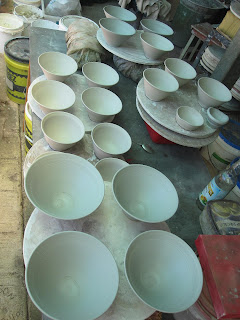 finally got some hands dirty. Little hands also made their first pot. Now I have to get down to business and stop procrastinating. Yesterday was a dry day so all pots are trimmed and a few jugs even have handles but today is different - humid and the odd shower - am I looking for excuses here? 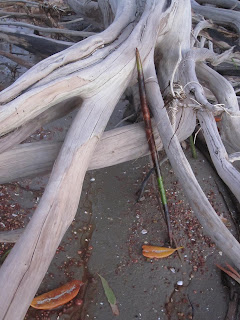 Nature is full of surprises - tucked away amongst the paperbark roots was this multi-coloured mangroove seed (I have never seen one with such a varied palette), standing tall while its mates were gathered on the high tide line in a jumbled mass.
Posted by mudheartpottery at 7:19 PM 2 comments: