Finally some pottery for 2008. Had a long day as one burner decided not to start so the firing choked around 1200 and I spent a long time trying to get things to move with constant rain falling. Fortunately the annoying leak took up and no water came down my chimney but not having anything to close off my unlit burner port seemed to create all sorts of problems and reduction was minimal. At least the porcelain sitting high in the kiln with its bauxite additions looks magical under sunlight, the variations in brush marks and etched designs highlighted with the clay's wonderful translucence. 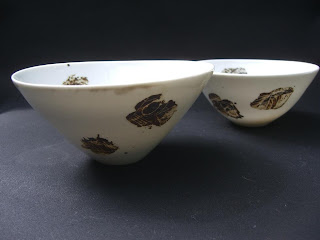 This pair acknowledge my concern for the local environment under threat of mining. I haunt Google Earth distressed at the proximity of the survey lines and encroaching machinery forever altering the landscape so now the straight line takes on a sinister meaning. 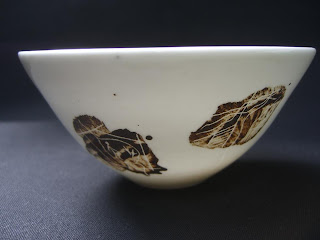 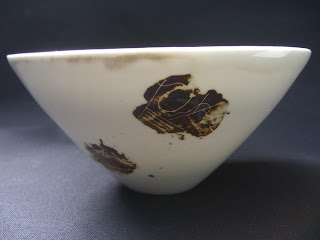 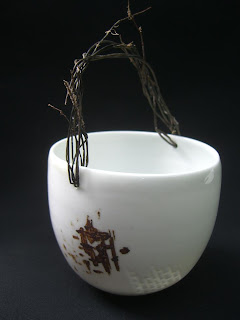 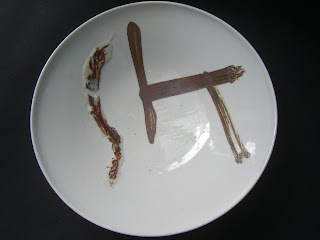 This low plate bears that hard line contrasting with the soft raised shino full of bauxte flows. I am still not sure it worked as I wanted - the underside shadowing the freeform decoration hinting at its ultimate fate. At 25cm wide I was worried it may slump but it held its form. This is new ground for me - testing the limits of this new clay addition to my practice - so far I love the results. 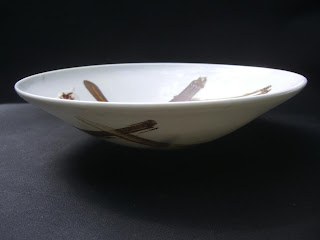 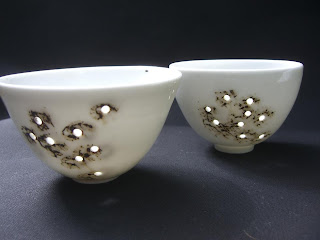 Dugongs, those gentle sea cows, feed along our coast on the seagrass beds and rough weather washes long pieces of this ribbon-like grass ashore so naturally it finds its way back to my little cache of found materials. Weaving it through these holes gave an interesting touch so the Dugong bowl is born! 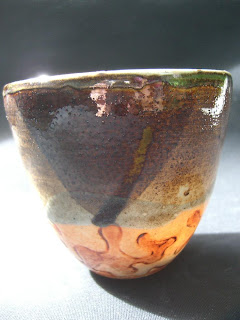 I have been a bit neglectful of my glazes - have to sieve my kaolin as I use the local material but prefer not to sieve the glaze after slaking down. Unfortunately bauxite often creeps into the favourites and this particular dark green glaze probably needs a clean up. This was a bit of a test with shino and bauxite on porcelain and I will definitely try the combination again in the next firing, being a bit more mindful of my glaze mixing. 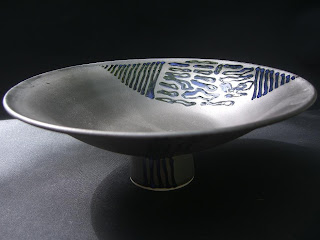 Finally a stoneware piece - the elegant blue black always a favourite addition to the load.

Now we have Nicholas collecting his wonderful pottery from the kiln. He has been patiently waiting for his masterpieces reminding us each day that his bowl is in the kiln! Things are getting exciting for Nicholas especially Nona's pottery and cups of tea............and the new baby in the tummy!!!

Posted by mudheartpottery at 2:14 AM No comments:

Nicholas has discovered uninhibited jumping - there is still an apprehensive look before he leaps but the urge to feel that mix of scared exhilaration takes control so of course Nona had to join in - she understands such craziness and isn't that what Nonas are for. 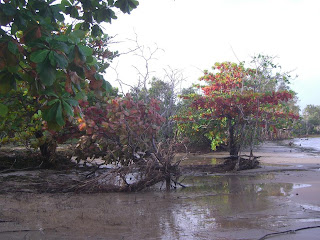 I have just been to the beach again - my camera works overtime capturing just a glimpse of the beauty all around me. Midnight often waits patiently but there are times where he feels the necessity to alter the canvas spread before the camera and leave his unmistakable mark! The ocean is quieter today but its colouration and seed laden waves a reminder of its past fury. Several of the wild almond trees have fallen in its wake but one determined soul sits several feet from its original place upright and defiant so maybe it will survive. 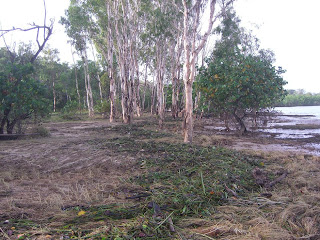 The shore is clean, flattened into submission, the vines entangled amongst the thousands of mangrove seeds pushed into a continuous mound marking the ocean's onslaught. Winds are still whipping up the seas leaving whitecaps far offshore. 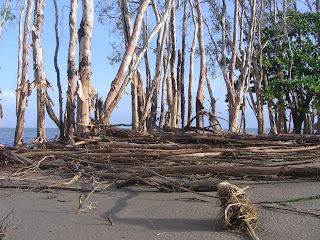 I love this photo - taken almost at sand height peering under the exposed paperbark roots. It projects a sense of calm despite the almost total exposure of the trees sustaining root systems.
Posted by mudheartpottery at 1:11 PM No comments: 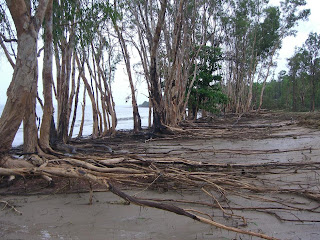 This was the beach yesterday at low tide with the exposed paperbarks' roots - no wonder several have given way to the ocean's onslaught and below is the scene today close to high tide. The bright green debris is thousands of mangrove seeds and the waves are heavy with more. It was so blustery this afternoon with pounding waves and salt spray filling the air. Midnight and I, alone wandering the newly formed landscape - pure heaven. 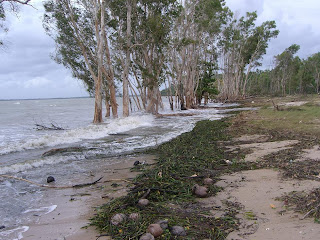 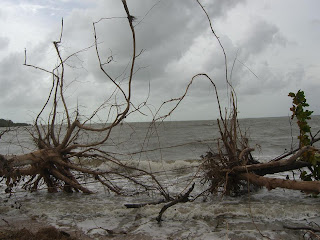 Two of the upended paperbarks entwined, but still held to the shore with a couple of determined roots - how much longer will they cling tenuously to the beach which gave them life. 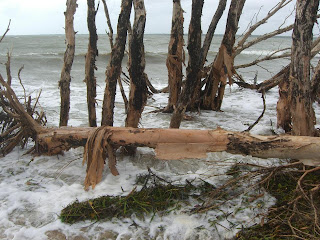 Another victim entangled amongst stronger companions, paperbark strips dancing with the waves and gales, against the heavy backdrop of an angry ocean.
Posted by mudheartpottery at 11:54 PM No comments:

Today has been filled with lots of rain and continual checking on the weather site to see the progress of the former cyclone called Helen. The mine went into Code Blue which means filling the trucks with bauxite and tidying up then homeward bound for the workers to do the same. I am so glad I didn't start to move my pottery as the low pressure system decided it would turn as it came closer to the coast and now is lower in the gulf leaving us on the outer rim but its still windy and the sea crashing on the shoreline is filling the air with its incredible sounds. The wind has picked up tonight so an early morning visit to the shoreline might reveal the results of nature's forces at work . 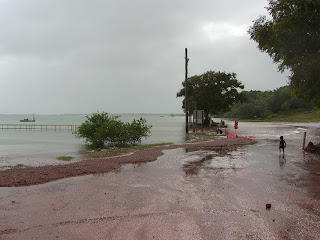 This is Evans Landing, normally a road but now awash - children enjoying the waves and on the wharf lots of people fishing for grunter - one of the nicest eating fish. 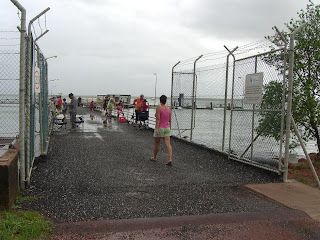 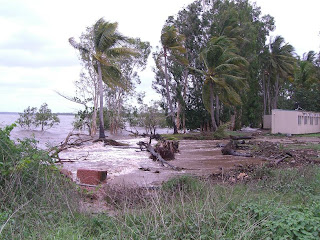 These temporary dongas felt the force of nature and apparently yesterday the water washed in even higher so lots of cleaning will be needed when the men return from their Xmas break!
Now for all of you familiar with my beach scenery this will bring home the might of nature - the usual dry flat is now awash with waves. 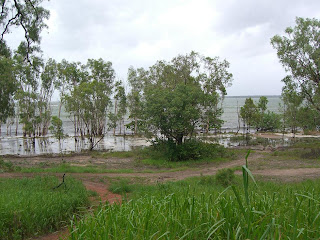 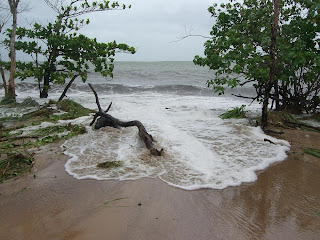 This is the top of the beach and the entrance - to the right my mum and dad always stow their shoes to pick up on the return but now the ocean is carving the ridge in its forceful way. 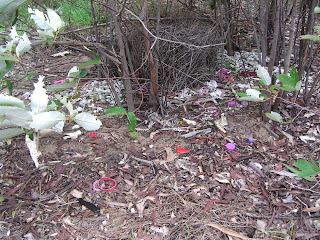 Remember my clever little bower bird - here's his collection of bits in his range of pinks, purple and red - he decided to build his nest away from the shore and I wondered if he had some premonition of things to come. I feel his choice has proven his innate ability to predict the coming weather. 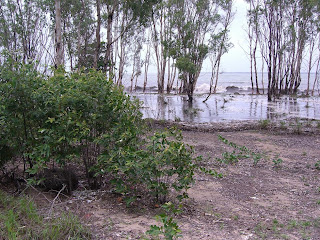 His bower is at the bottom left of the picture under the bush and the water is not too far away. He is safe for now so hopefully he will not have to relocate again. 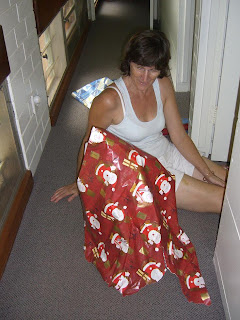 Nicholas and I decided we needed to have another present wrapping session with Nicholas as the present. He was completely cooperative and stayed still while I covered him in paper telling him he was the present. He is so clever this little grandson of mine and then took to the walking present bit as well. He walked straight ahead without peeking acting the part with me in absolute stiches behind. 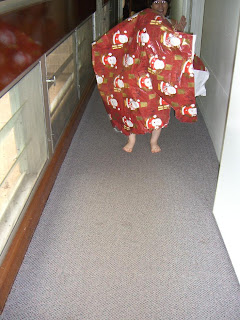 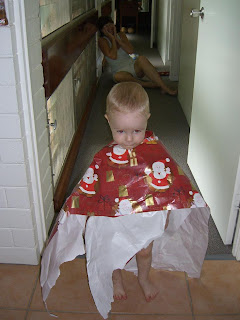 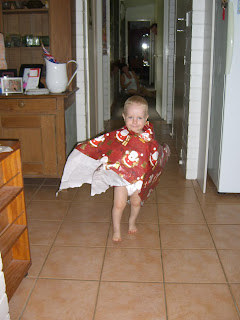 Don't you just love the comical look of determination - meanwhile mum is literally running trying to keep the camera clicking to capture these wonderful moments. 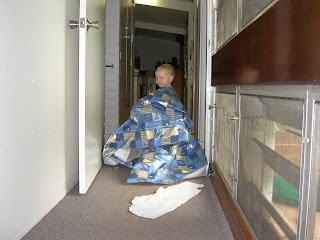 Now this looks like something out of a Japanese movie - the paper transformed with that wonderful swirl into an incredible kimono fit for a little king! We had so much fun with that wrapping paper, later using it to slide and write on. Nicholas loved every minute in the hallway. Life provides us with some unforgettable intimate moments and how I love the digital camera allowing endless clicking to capture all these moments converting them in an instant.
Posted by mudheartpottery at 12:27 AM No comments: