The Winds are still howling! 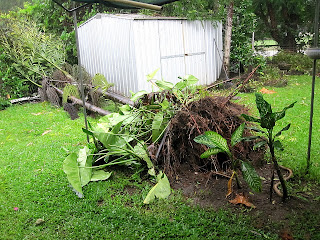 One casualty in the back garden but it couldn't have picked a better spot to fall. If this wind and rain stops tomorrow maybe the axe will be swinging and I can put it back in its place.     Wind gusts have been relentless and the combination of that and the ocean's roar has been deafening at times.   Oswald lost strength according to the weatherman but conditions have not changed all day so it seems we are to be serenaded again tonight with the wind and rain. 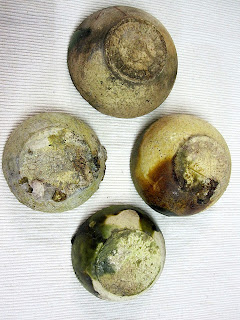 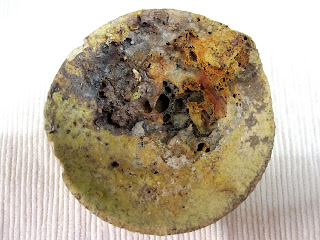 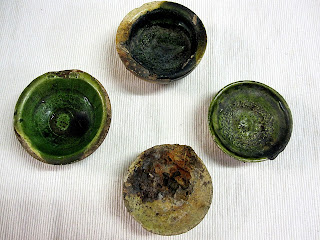 Copper glazes.   I am a lover of small pots making and falling in love with them continually so my cupboards house too many for any one person to use but I find it difficult to part with them - that's the hoarder in me.   These little gems are not mine but they have lived with me for over 50 years.   My Dad loved mining history so as children my brother and I spent many holidays seeking out old mining areas and some new ones as well.   These were testing crucibles made at the Battersea Works in England and used at the Chillagoe Copper Mine.   In the late 1950's the old mine site was completely abandoned and held little interest to visitors.   The main attraction was a tour of the limestone caves by torchlight.  These caves are still an attraction and the area is also renowned for its beautiful marble.

As a child scratching around the lab area was such fun where these little gems lay in their hundreds.   Taller beaker style ones were there as well with incredible colour variations.   A cardboard box soon overflowed and found its way into the trusty FJ Holden along with the camping gear.   Dad, too was the hoarding type but his bits and pieces collected in his lifetime provide the family with many cherished memories of an interesting life  -  maybe my love of little pots began here.......

Posted by mudheartpottery at 4:10 AM No comments:

He is lurking out there writhing above the ocean waves sending his tendrils fanning out snatching the branches and leaves from the trees.   'Gales are expected'  the warnings say - well we have had gales all day long and now the constant roar and ocean's fury is unrelenting and he is sitting at the bottom of the Gulf.  The town is Code Blue - cyclone conditions apply.   We are used to ferocious storms up here and quietly await what Mother Nature brings.   Fortunately we are a few houses from the beach and the difference in the wind is noticeable when walking around the corner to the beachfront road.

We do have a new Cyclone Shelter - I think they may be tiling the inside - ironic if in its near completion it may come into use.   Such a shame its position is so close to the shore where wind velocity is at its highest and parking in cyclonic conditions would be an interesting exercise with all the trees in its vicinty.    I am not sure what the safest option would be if conditions did require transport to the shelter.

Anyway I have covered my kiln just in case the wind damages my kiln shed roof.  My little outside 'studio' area has not been touched so fingers crossed Oswald will kindly cross the coast at some uninhabited point south of us and lose its strength.  Fortunately these early houses were designed with cyclones in mind and aligned with the narrowest end facing a typical coastal onslaught.   Since their construction the town has only had minor 'blows' so we have been lucky.   The Cape is a big area and land seems to soften their fury.

At least I have very little pottery sitting out there - probably a good thing as it is getting blasted with spray from these wild winds.  We have been complaining about no rain - well its raining now and the late Wet has certainly begun.   I think my visiting friend spoke too much about the lack of rain to the 'Old People' a week ago and they have given him his answer!    He will be smiling down there in suburbia! 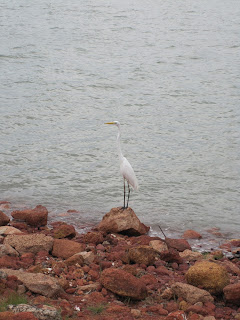